I arrive in Camden amongst a rabble of street dwellers, ticket touts, and impressively dressed punters; already a hive of activity the Roundhouse still appears piping hot after a whole month of artists performing at the iTunes festival throughout September. Inclusive of a fine array of acts having played last month, GOAT must surely banquette on this energy, relishing every moment of their headlining show.

I overhear conversations surrounding the hype behind the Swedish experimental fusion band. Their consummation of the main stage at last years Glastonbury festival, sublime superlatives on their Jools Holland show and nominations for album of 2012, this band needed no predecessors to get things cooking on stage this evening. 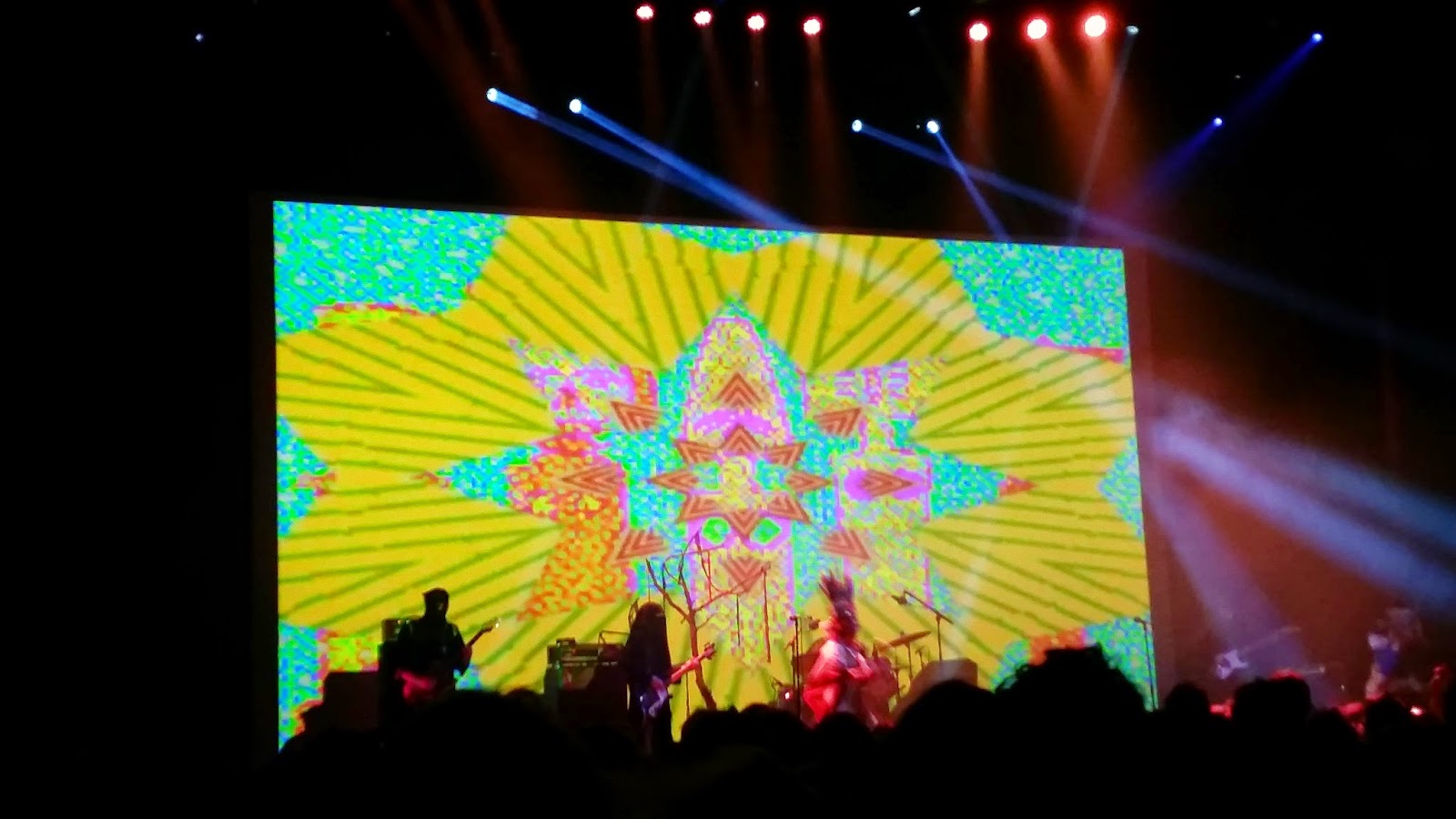 After superb performances from support acts The Lay Llamas and Les Big Bird, the house of round now packed to the rafters. Anticipation reaches climatic proportions as the band don the stage to rapturous applause, for whom the bell tolls as they enthusiastically launch into opening track Talk to God. Groovy riffs and frantic dancing, the band demonstrate their versatility by playing hits off their record 'World music'. Crowd folk dance and sway, pulling all manner of shapes and simply going wild for the instrumental compositions and vocal witchery from the ferociously funky hepdomad psych rockers.

Let it Bleed is a stonking anthem, a fans favourite with remnants of Death in Vegas, the atmosphere is electrifying. Disco fever hails percussive prowess in a sea of blues riffery as the two masked female front ladies are emphatically full of energy and curiosity, dressed to extremity in a wondrous display of colours and mystique. GOAT's costume and props wardrobe must occupy half of the tour bus! 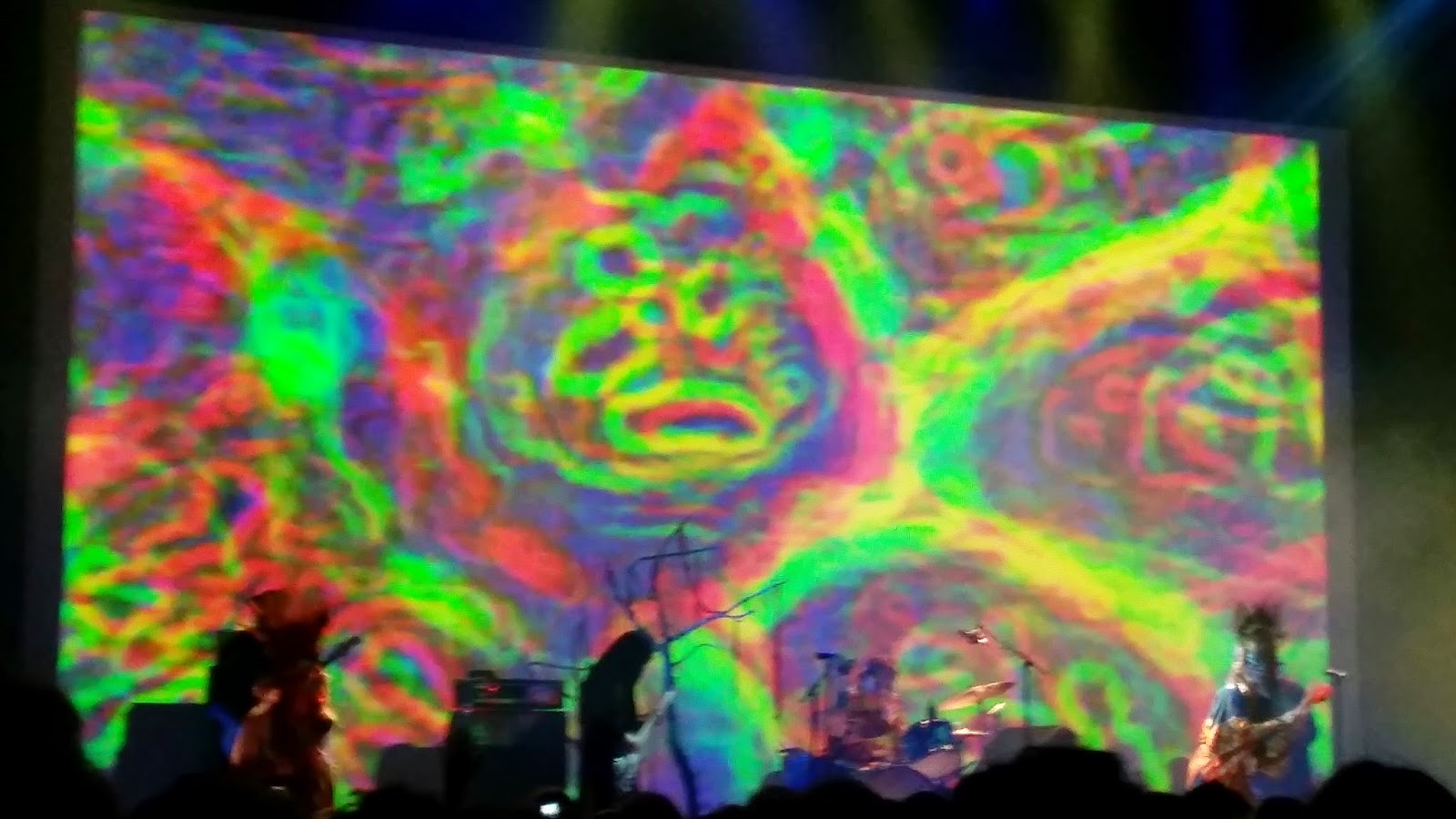 The resounding phrase 'Boy you better run to your momma now' repeats as the accented horde sing along when the track finishes a cappella, repeating until a thrashy Djembe rings aloud, holler tribal screams emanate wall to wall of the circular setting. Epic wizardry displaying whirly-gig grooves as flamboyant dance totemic swaggery fills the room to the sounds of Hide from the sun and Words. Magnificent melodies come from the effeminate dames as they shake their maracas along to Goatslaves.

I look to the left and I spot an over enthused punter climbing up one of the Colosseum style beams to get a better view of the stage. They flamboyantly thrash a free arm that pounds the air in jubilation, there is something magical in the air. 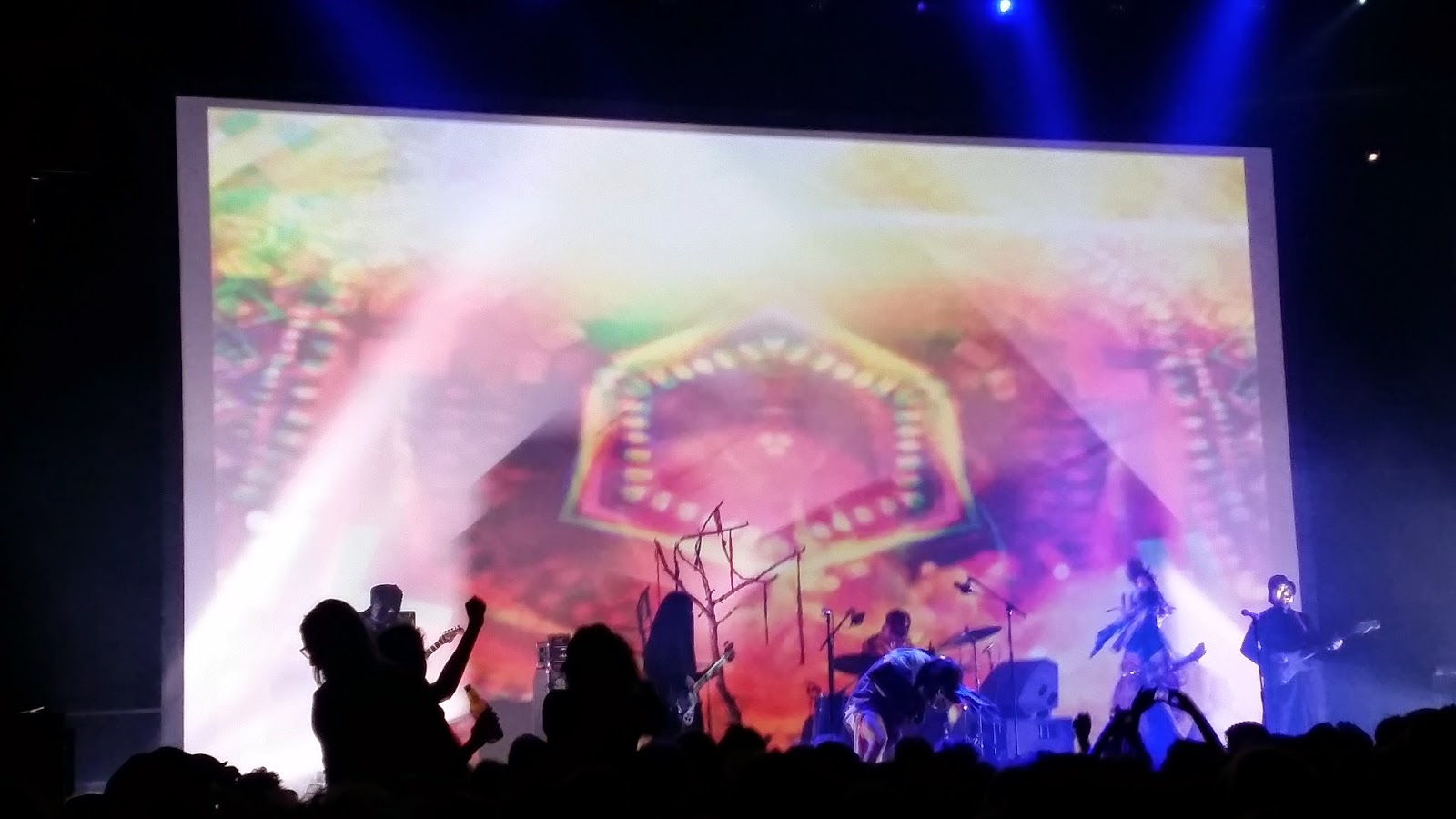 Instrumental repetition, beats of the drum thumps through my rib cage as the middle eastern influence transports us all into a trance of hypnoses and just as I find I'm dancing uncontrollably, an emboldened fella standing next to me tells me he needed a partner in crime to get closer to the front for the last few songs... In a heart beat I agree as we squeeze through to get as near to to the front as possible, situated front centre the in-house PA shows what it's made of when GOAT play out an energetic encore of Golden dawn and The sun the moon.

There is mystique behind their line up as the question must be 'Who are the talented musicians behind the masks!?' Long may GOAT carry on grazing on mystical propriety and voodoo witchery. Whilst moon doth glow and sun may show, they must play upon the grassy knoll until the Cow's Goat's come home.. 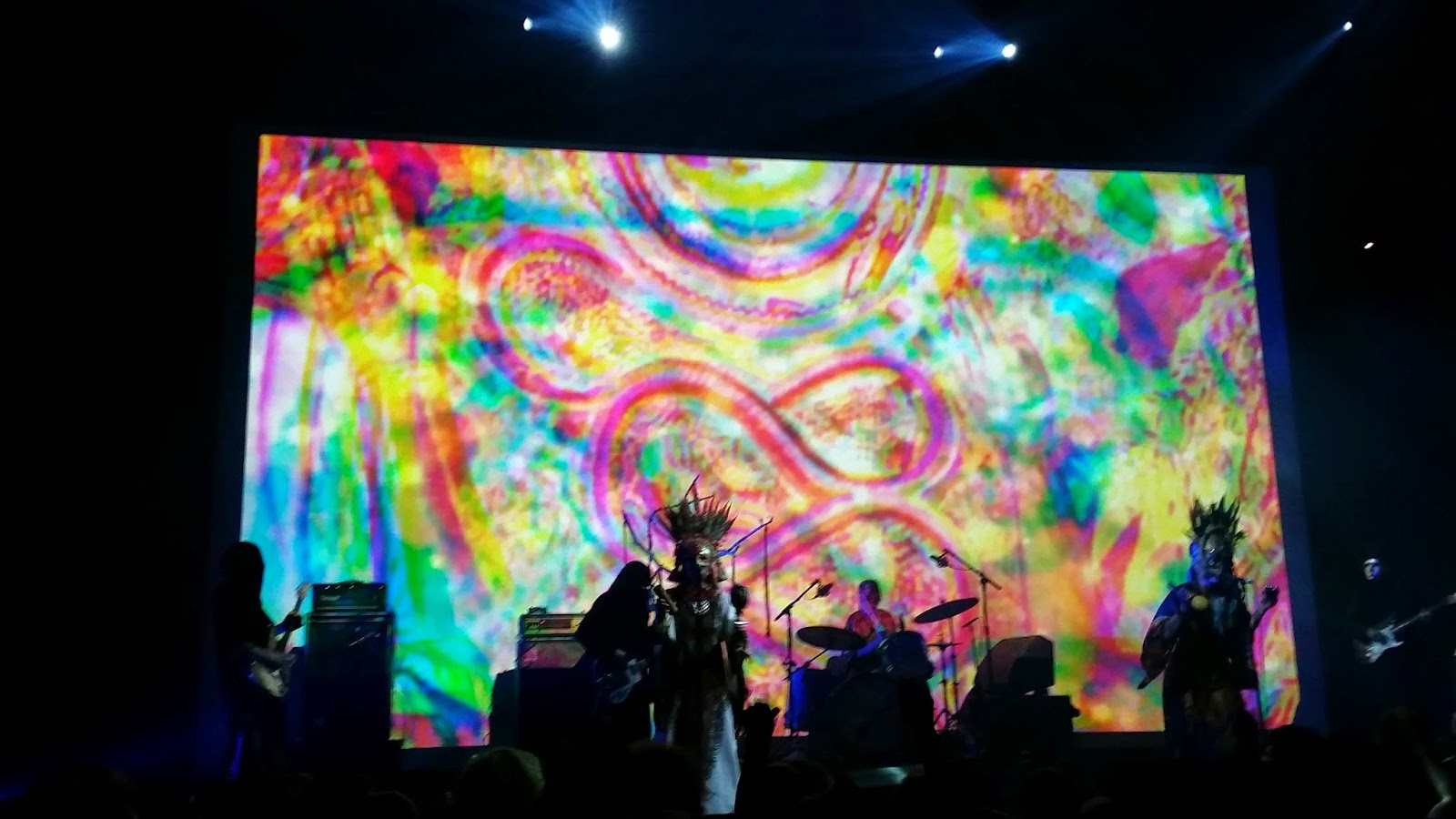 Arriving in Camden mid Friday afternoon and already I can hear the seventies soused timbre of Zodiac performing an acoustic set at the Vans store opposite the tube station. T'was already packed to the rafters so we admired them with ears in the shop doorway, soaking up the atmosphere and preparing ourselves for a weekend of deserty rocky mayhem, a guitar pedal feast with mammoth sized beards, Jäger guzzling, a whole lotta rock, a holy little roll, epic long axe solos and a sea of Orange amps all cranked up to 11. Reliving and reviewing my journey through Desertfest 2014... 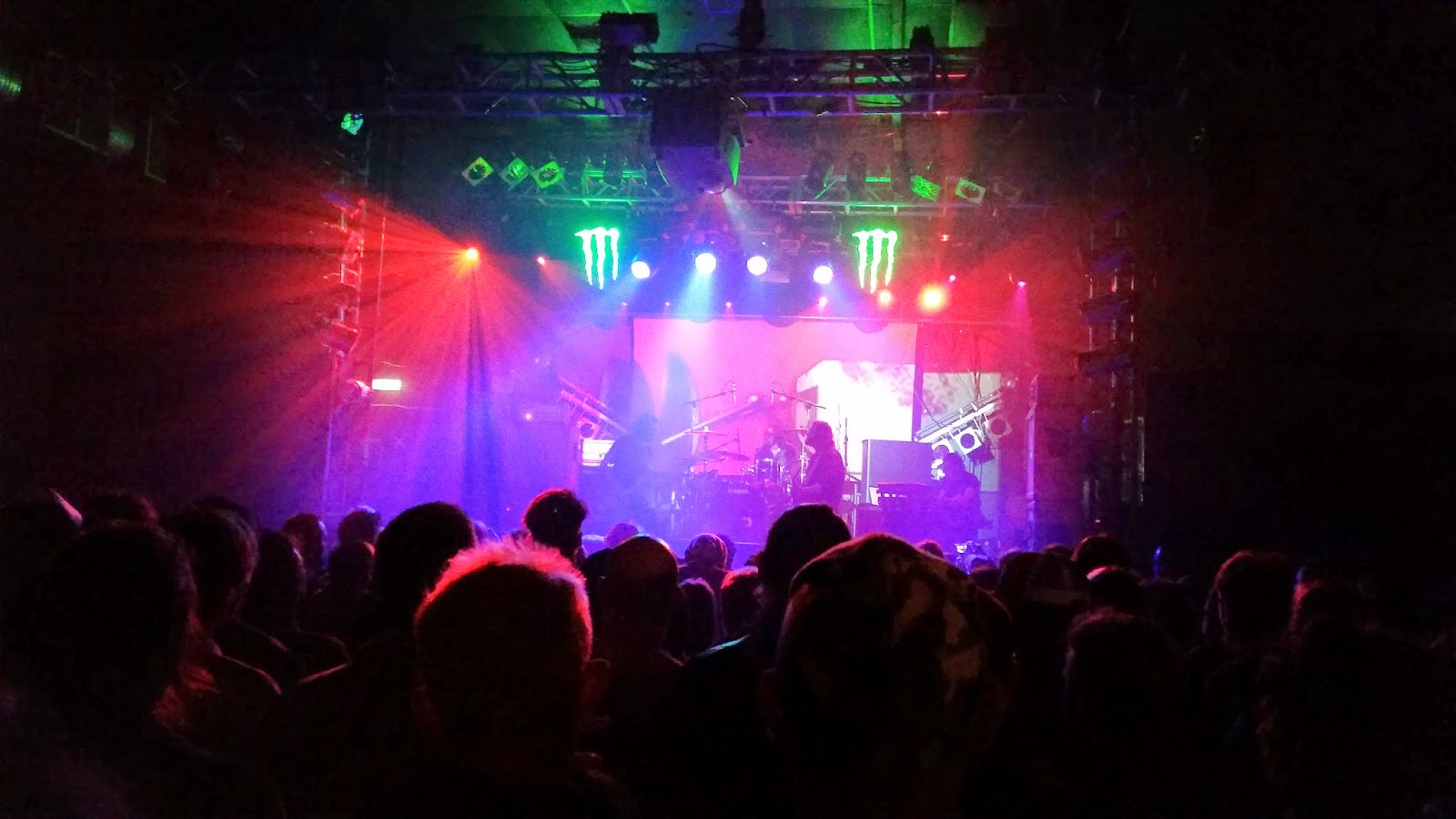 Scorching anticipation in the air as monkey3 graced the stage. Superbly crafted Floyd-esque dynamics transporting the crowd to spiritual elation, influenced pinches of a heavily-armed Mogwai, providing the perfect soundtrack for the majestic light display and trippy projection show, all aboard a journey into an infinite dimension. The perfect opener to commence proceedings at the Ballroom. 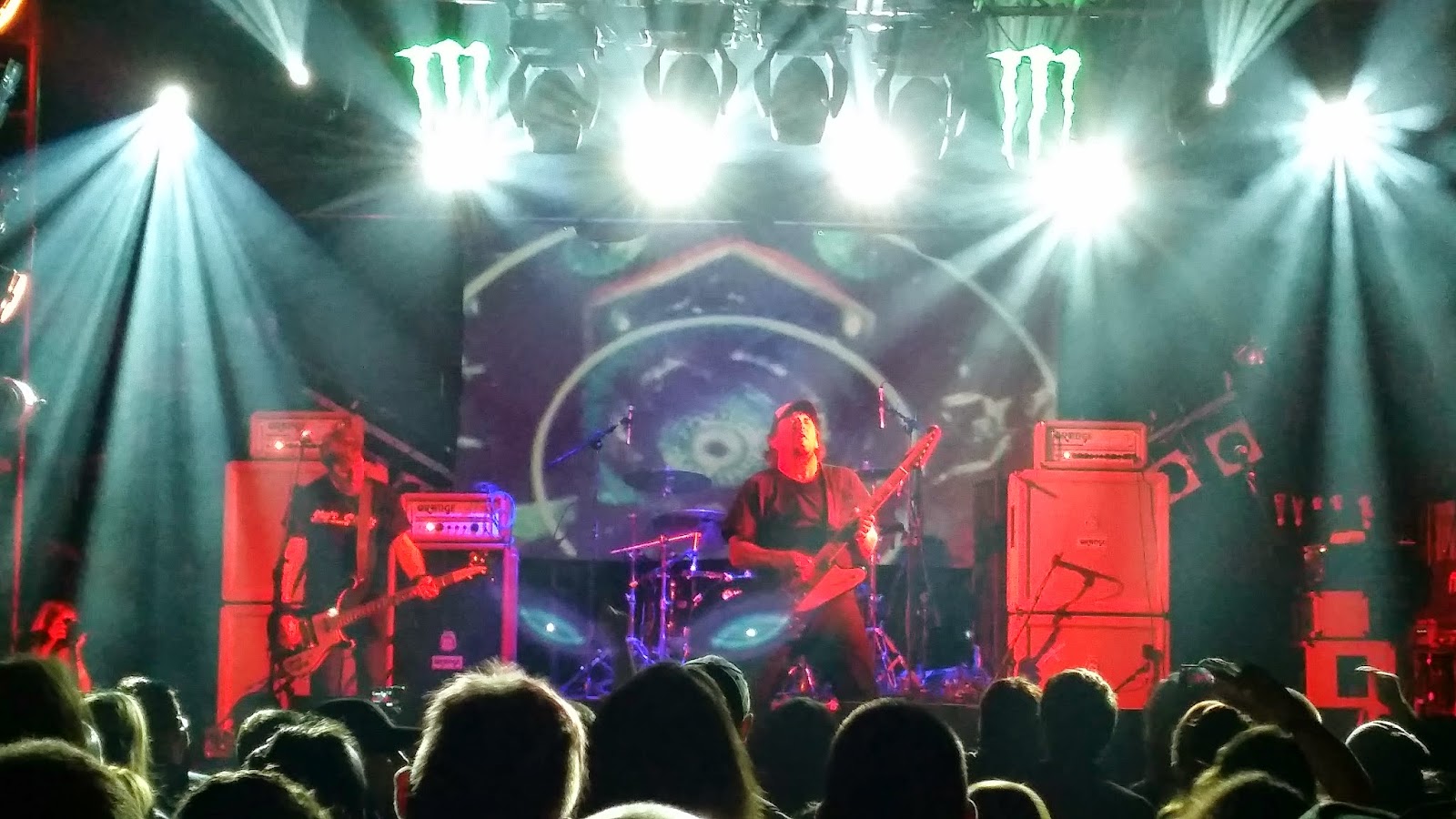 Still in a mesmerized state and the festival has only just begun. Sasquatch were up next and this band know how to rock 'n' roll. Stunningly hard driven and focused toe tapping songs. A monolithic performance fresh out of the Black label society book of how to smash out 101% proof whisky soaked, headbanging riffs. 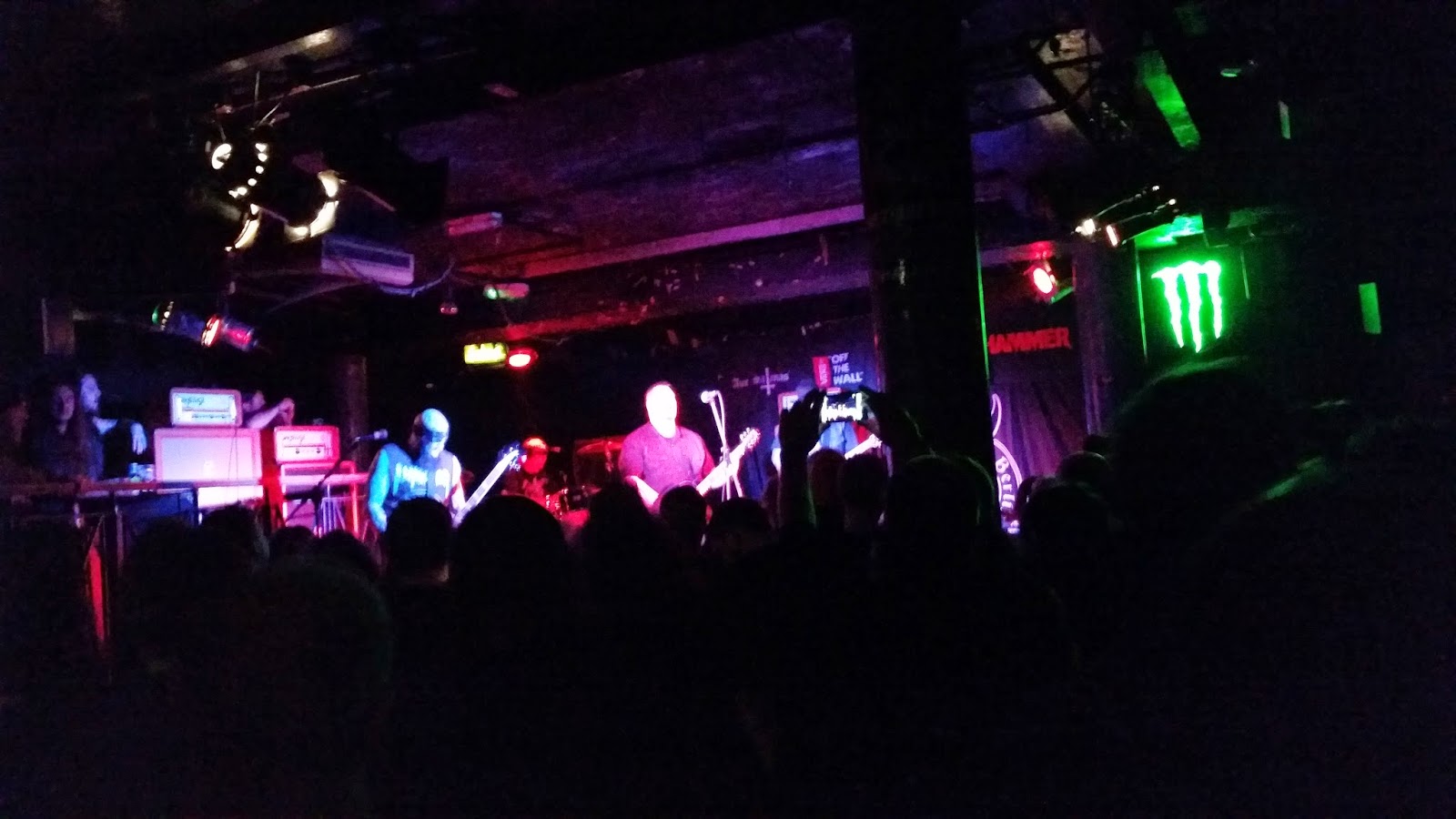 Down to the Underworld to hear hearty southern gentlemen stories about drinking as all things come to pass. SWS provided a lucid, laid back stoner vibe that was perfect for fueling my uncontrollable swaying, as the crowd transfixed on a twelve ounce meaty slab of a performance. 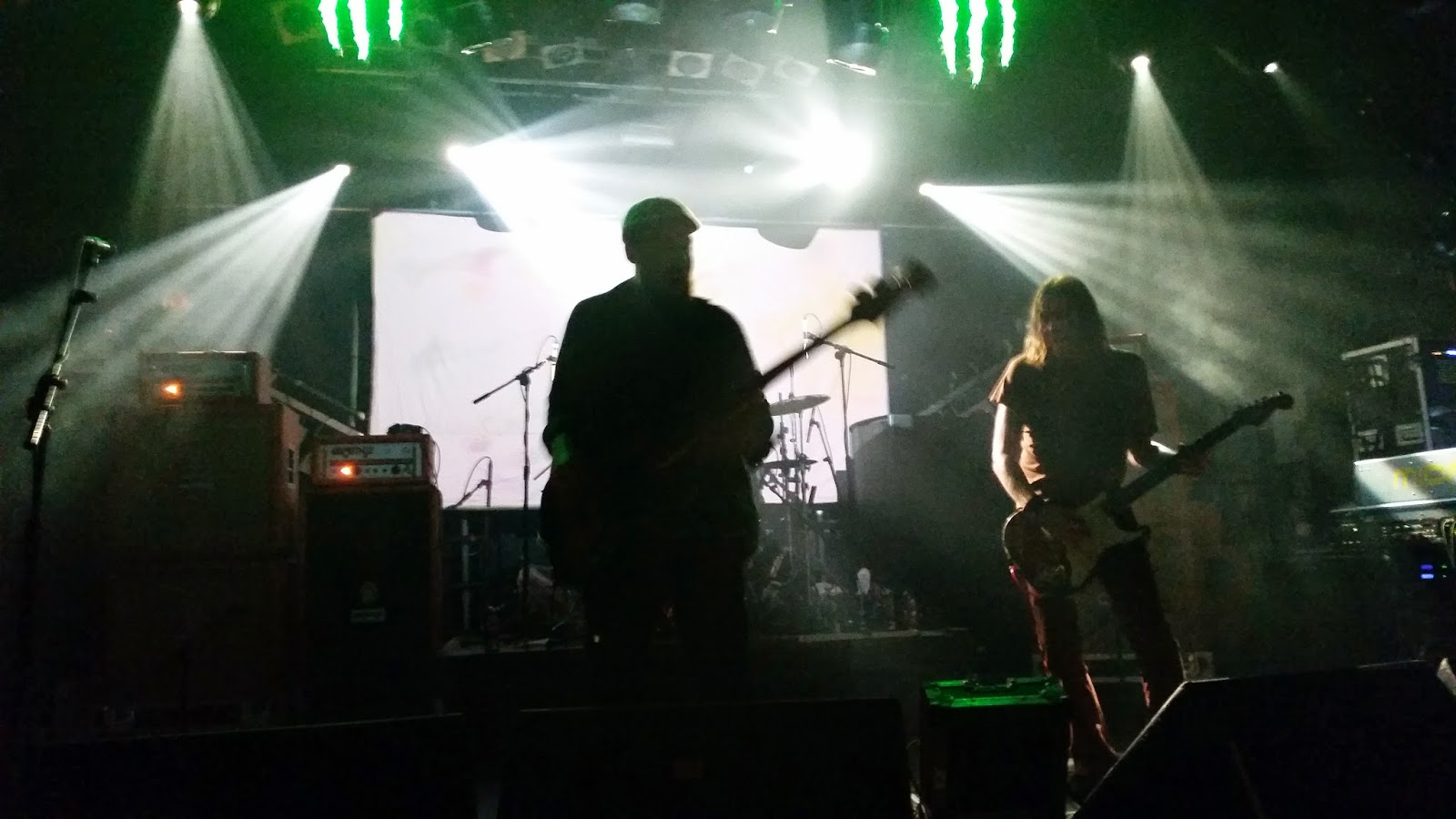 I've always been a huge fan of Monster Magnet and this dude is the pioneer of 90's Space Rock. UEMG's enigmatic 'jam it out' song structures and Ed's jaw dropping guitar skills put him in an elitist god like guitar player list. Prodigious instrumental funka-dunk-adelica. Ol' Wino and co are an institution of this magical scene. The pure 'Spirit' of the festival and like true pro's they put on a magnificent headliners performance from start to finish. Jamming out 'left of centre' groovy Sabbath soaked tones and substantial sized riffs from the depths of the mire. 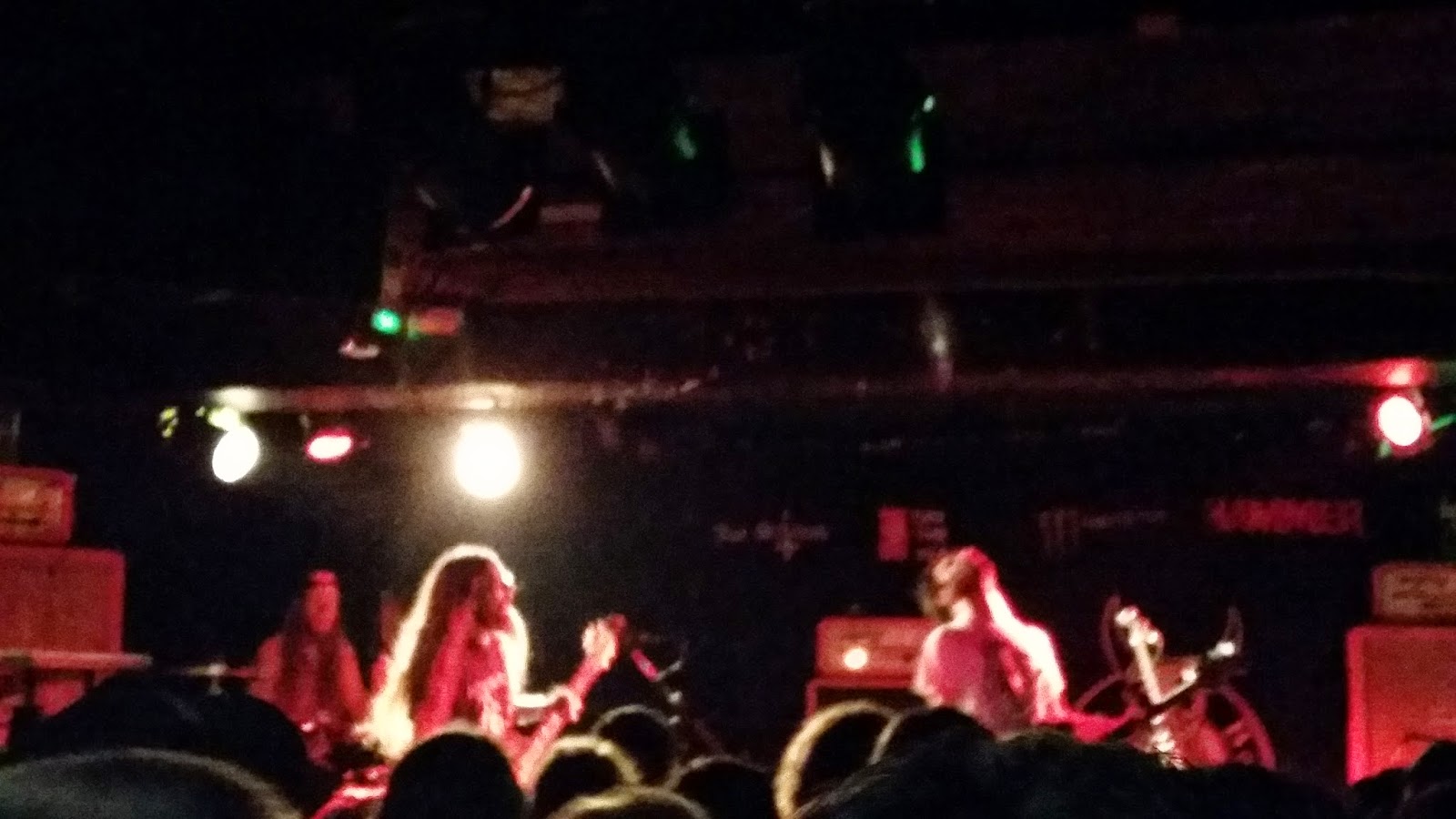 The day began with a heady dose of the heroic Slabdragger. The ultimate doomers obliterated the Underworld. An inspired performance from these local London lads. Soaked in the sweet leaf they showed a packed hangover nursing venue how to begin jour numero deux with depth and aplomb.. 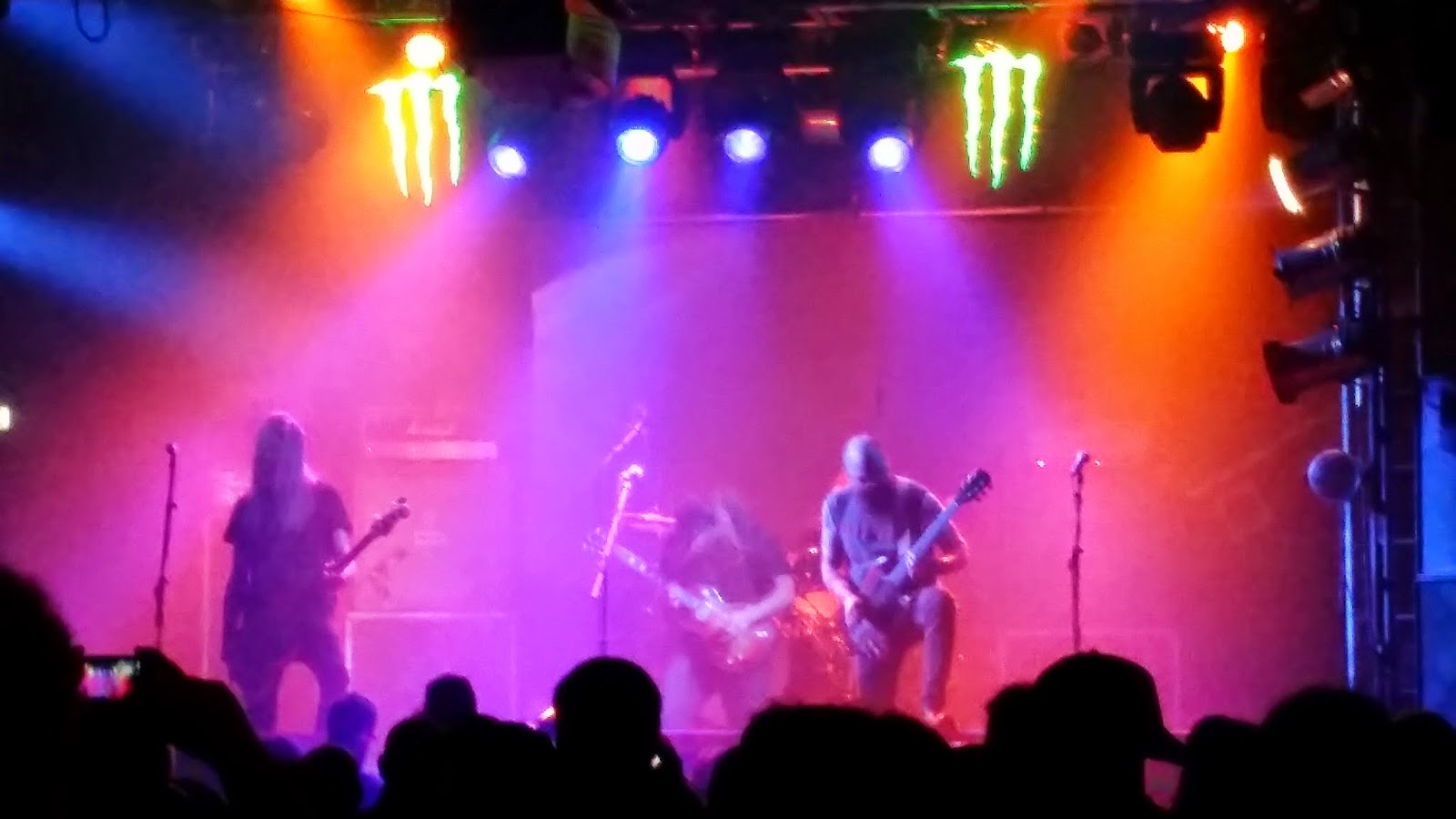 I was really looking forward to seeing Anciients live. And they truly blew the Ballroom a new one. Pin point showmanship and progressive music that makes you want to go in all out pursuit of a noble quest. "Go forth on your steed in search of the sacred riff" *Fist pumps the air! 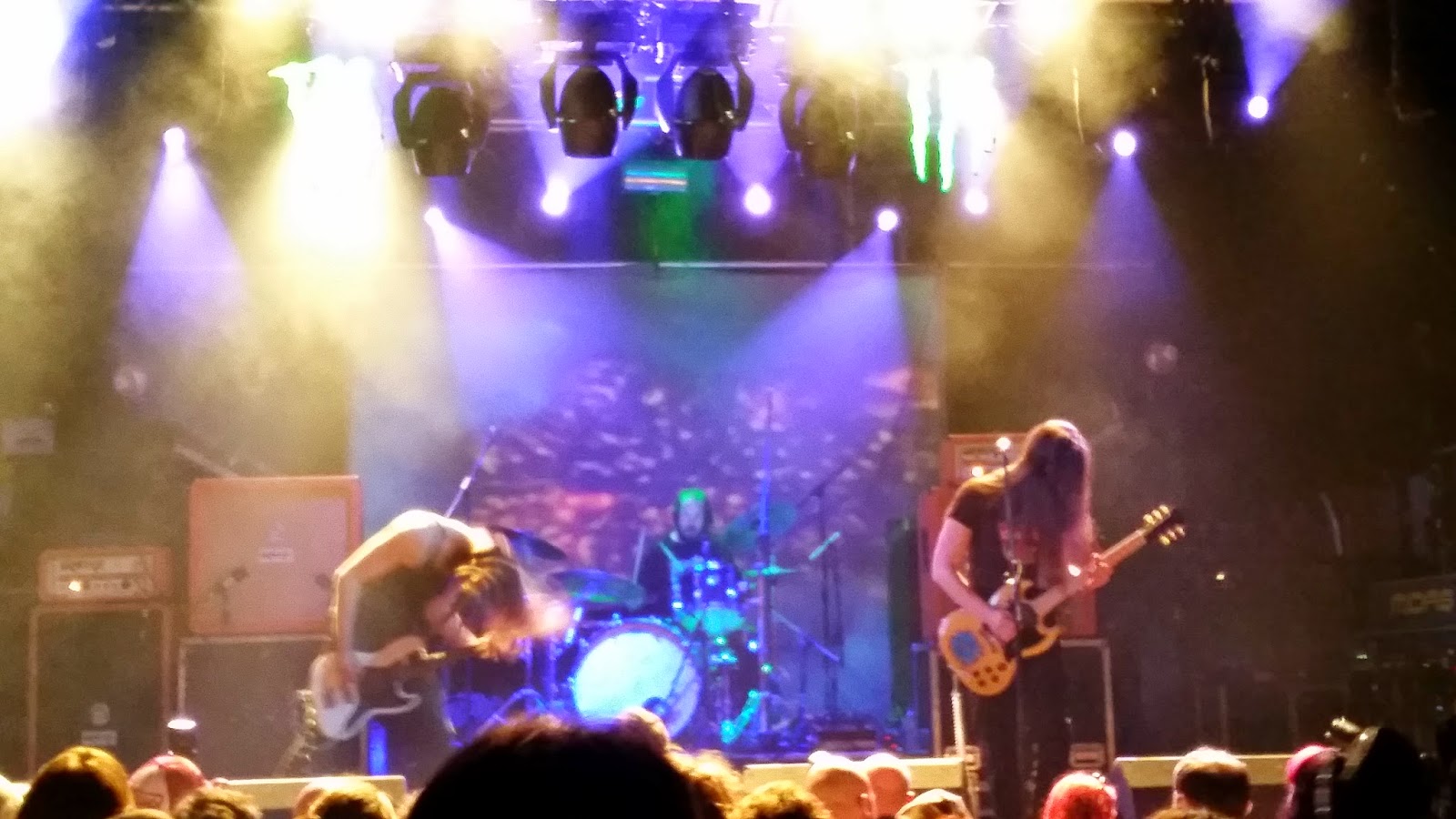 Tricky to sum these guys up in only a few superlatives. Grandiose sound from a trio heavily drenched in gnarly blues playing in perfect tandem with the on screen pyrotechnics. An incredible knack for sending you on a serious psychedelic trip journeying through space an time to planet third eye. 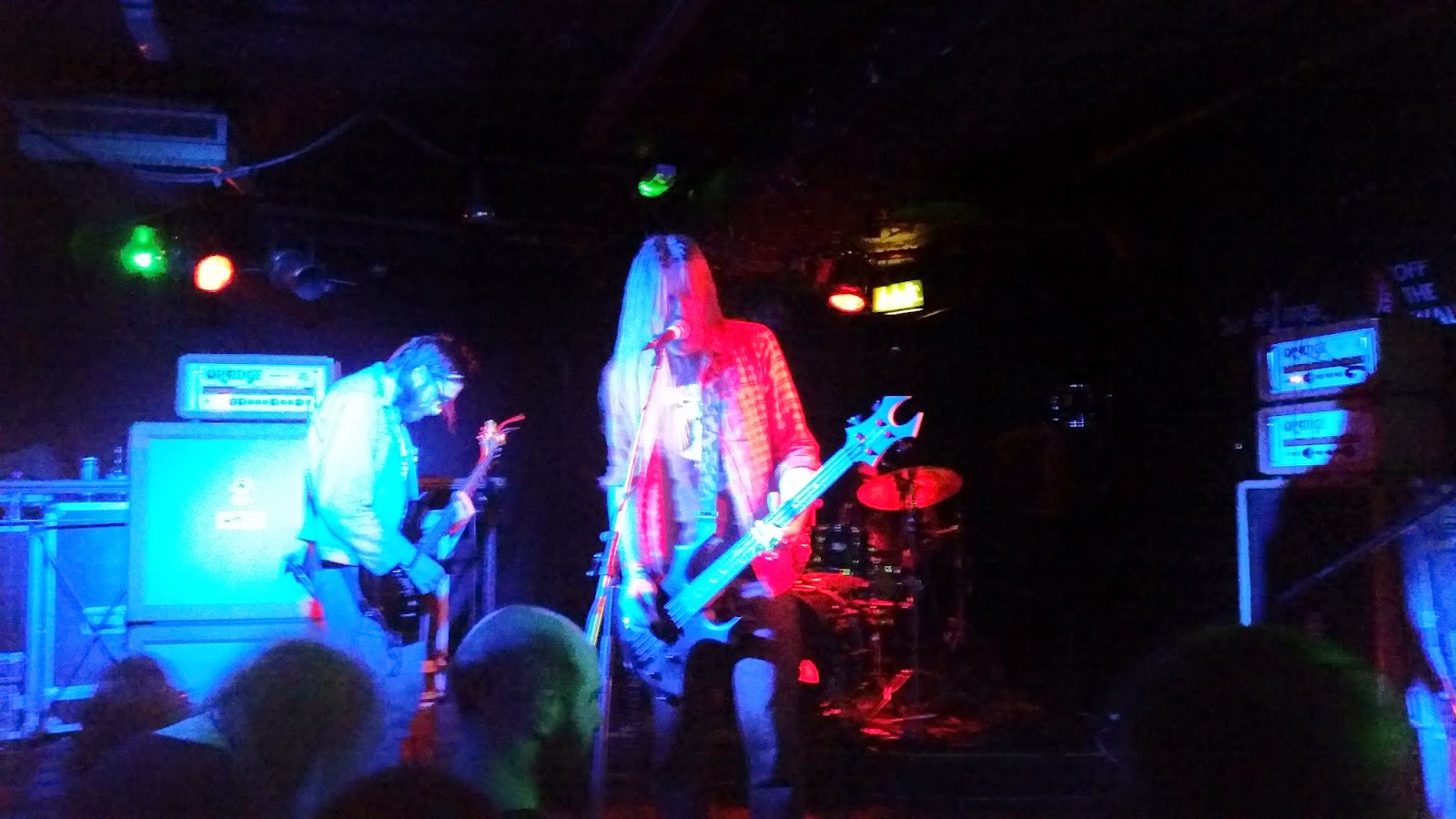 Back over 'road to the Underworld to see 11Paranoias perform. Bleak, desolate, sax synthesizer madness. A soundscape of lunacy and hypnotic loops enough to penetrate the thickest of skin. Crawling haunting drones and perplexing tones.


Weedeater
A friend of mine managed to catch Weedeaters drummer play live and see him do his 'Animal ' impression. They sounded awesome. The guest appearance from Wino was surely a treat for those in attendance. 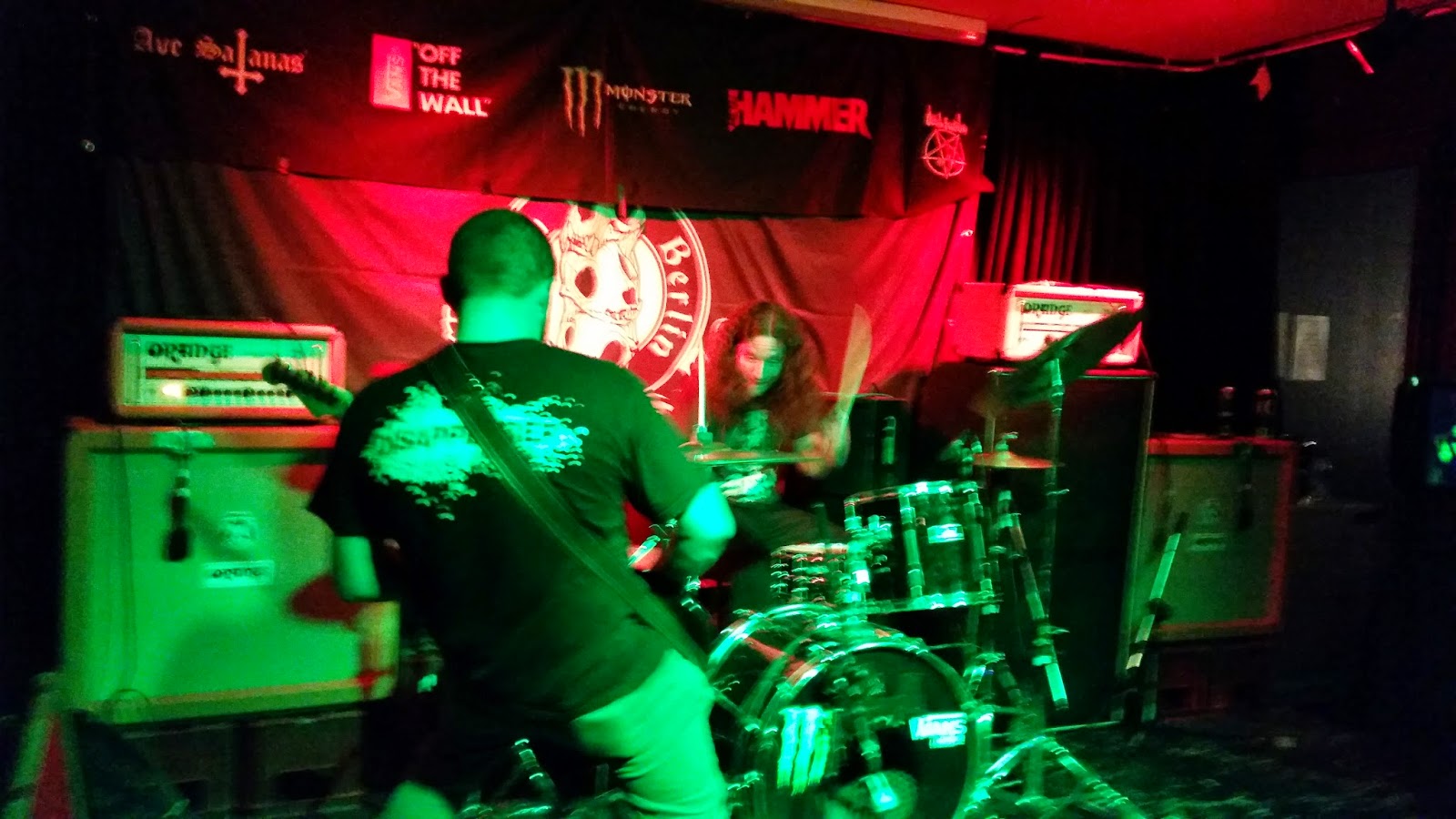 There's nothing better than checking out a band you know nothing of musically and being blown away by them. The Black heart was the perfect venue as the responsive crowd welcomed their talented prowess, à la Devils White stripes. This Aussie duo that had pure passion about their craft and made up for the lack of band members by sounding Zeus sized. 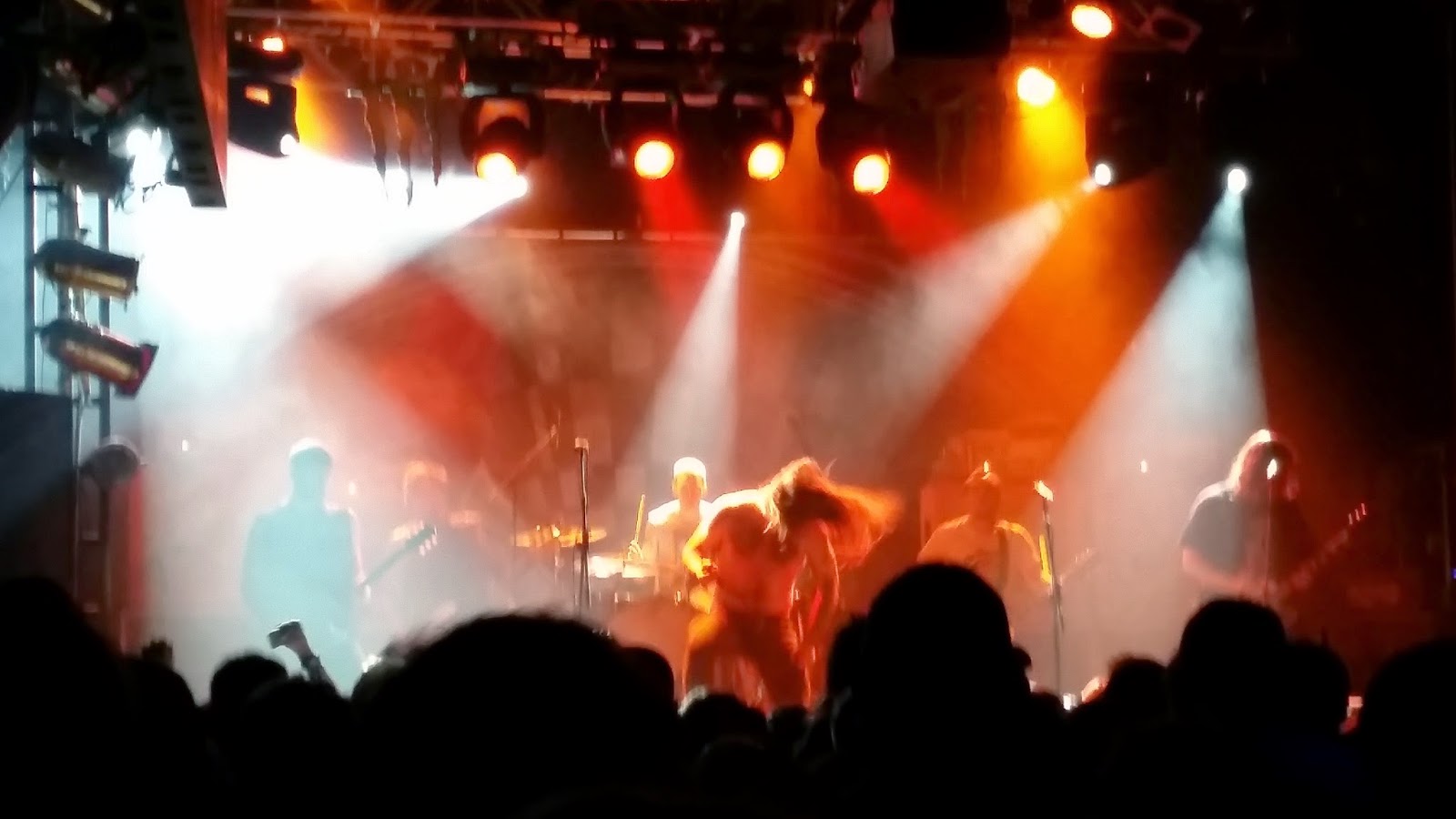 Dashed back across to experience headliners Kvelertak owning the stage. These guys know how to merge stoner riffs and metal licks. Insane flag waving, stage pacing front-man antics and sing along Choruses. The responsive crowd eating out of the palms of their chalices.. 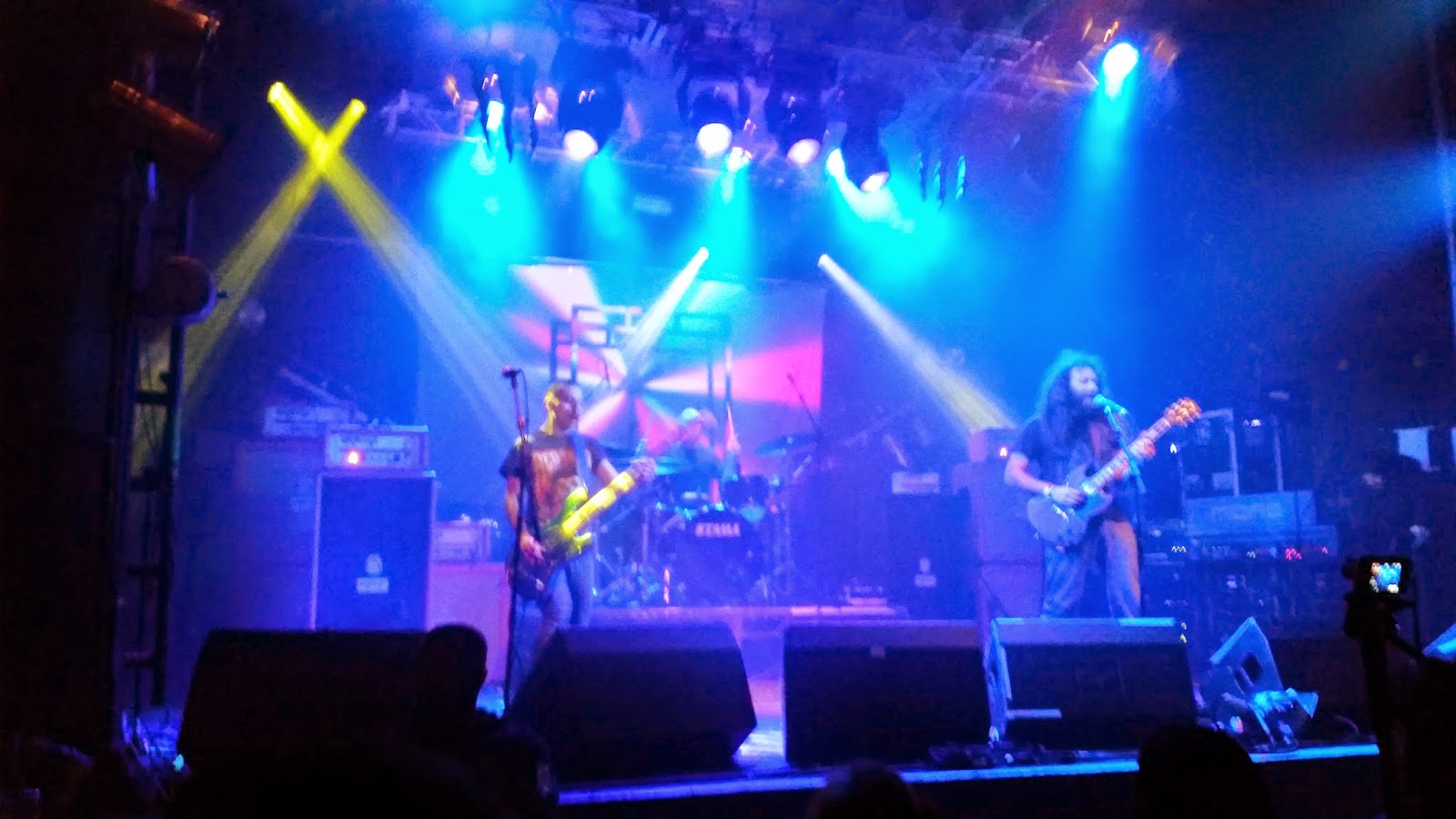 The moment they began, I had to dash to the front. This Italian trio relished every minute of playing the main stage on their first time playing in ol' Blighty. Mighty power trio playing tremendous earth shaking rawk 'n' roll. I cannot get enough of those awe inspiring five minute ridiculously widdly guitar solos. 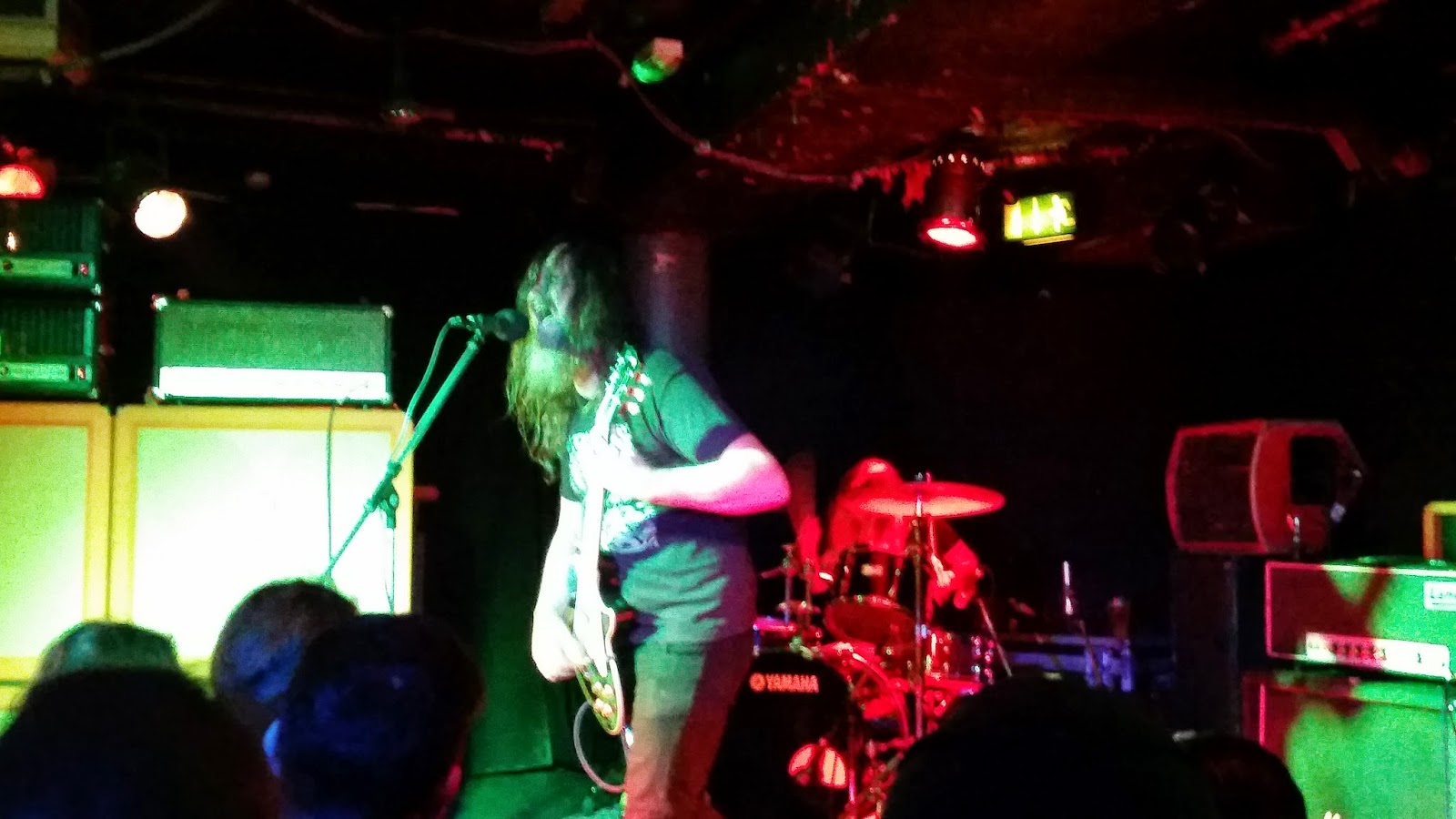 Another two piece powerhouse, drone laden, live and loud. Reverberating vocals from the depths of the mysterious temple of doom. Pombagira's drummer totally pulled it out of the bag considering her faulty bass drum pedal was playing up. "Change it after the first song" Ok yeah sure, no problem, all their songs are 10 minutes long! 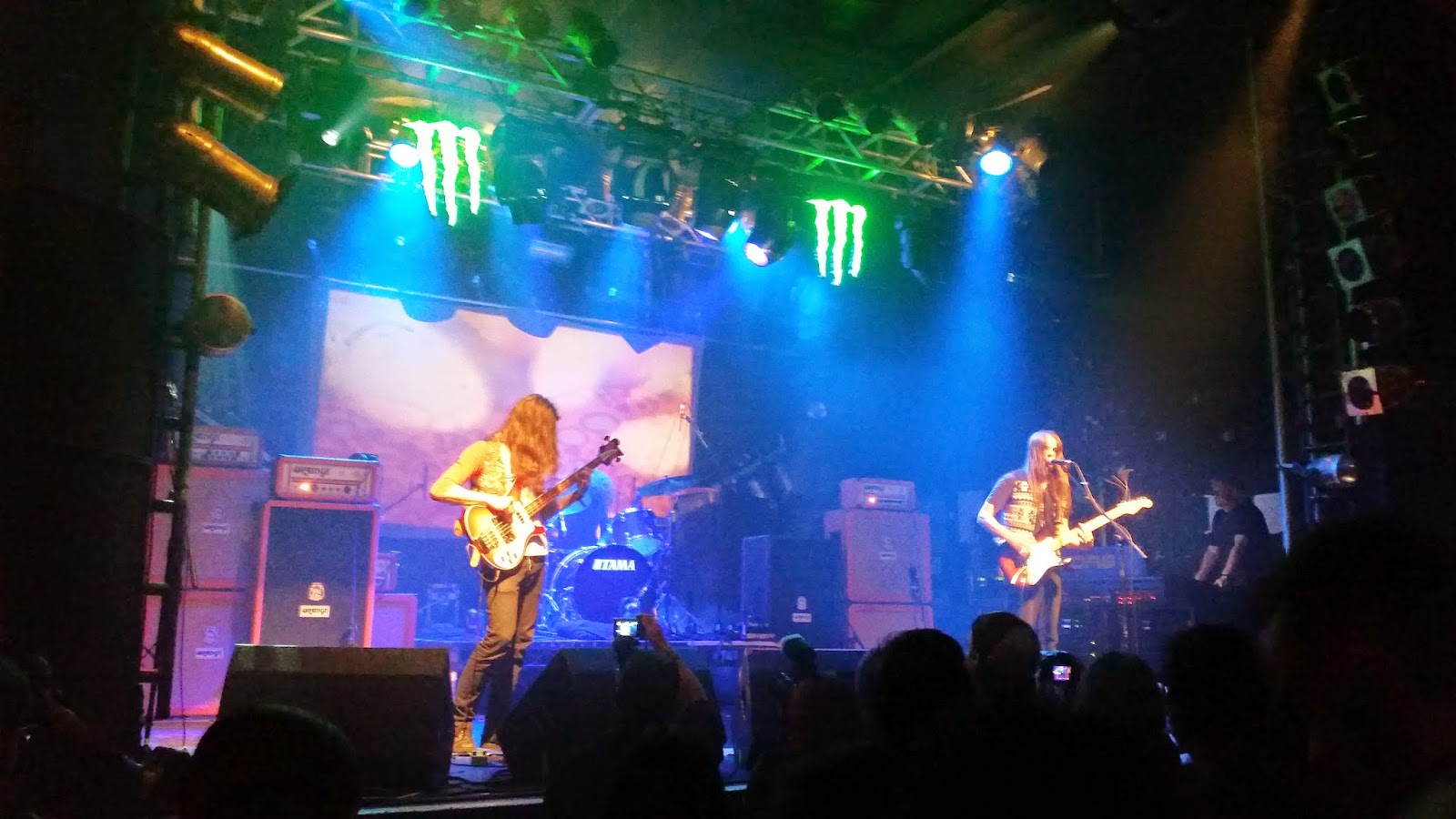 I've always 'dug' blues rock extraordinaire's Radio Moscow big time. Rollin' along Bluesville like a no holds barred Black Keys. The new album is promising to be one of my favourites this year judging by the tracks off the forthcoming record that they played here tonight in Camden town. The tightest of rhythm sections allowing an epic showcase in blues guitar wizardry, They shall surely return as noble headliners. 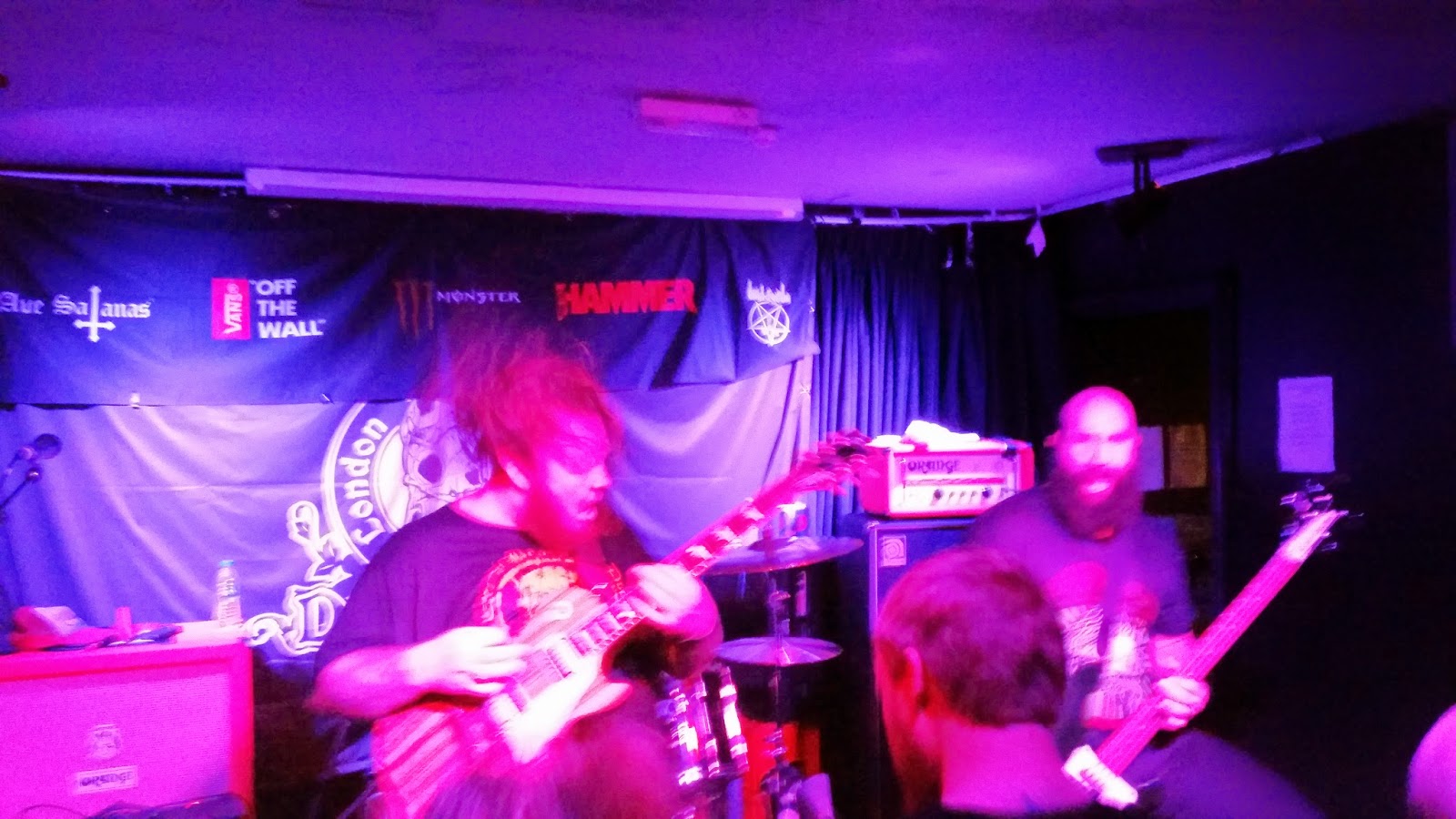 So. Much. Awesome. Gospel style vocals, harmonica infused resonating power complimenting the raw energy that this band has in droves. The front-man plays right up there in your face. Just like a freight train bulldozing along obliterating the speed of sound. 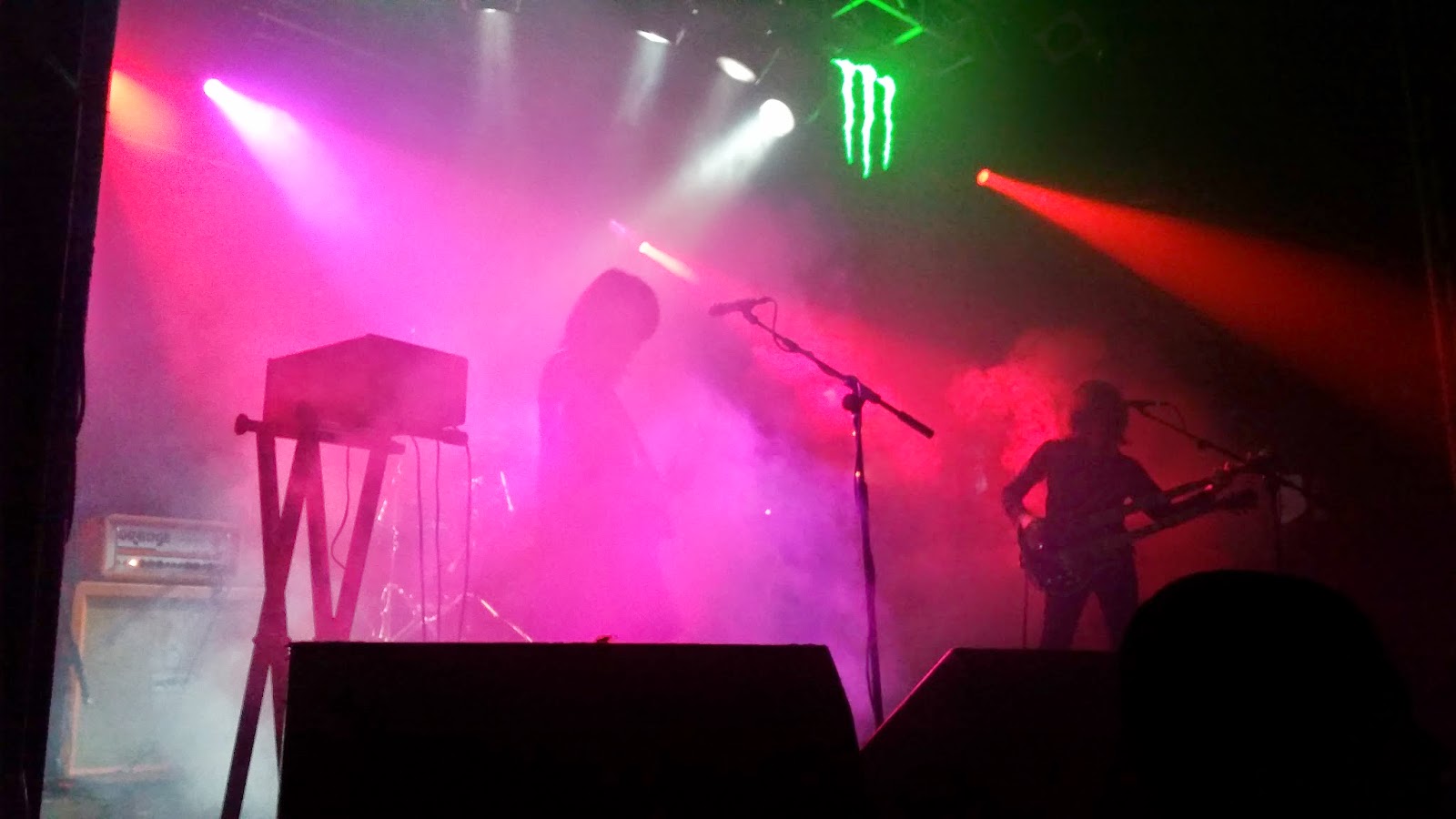 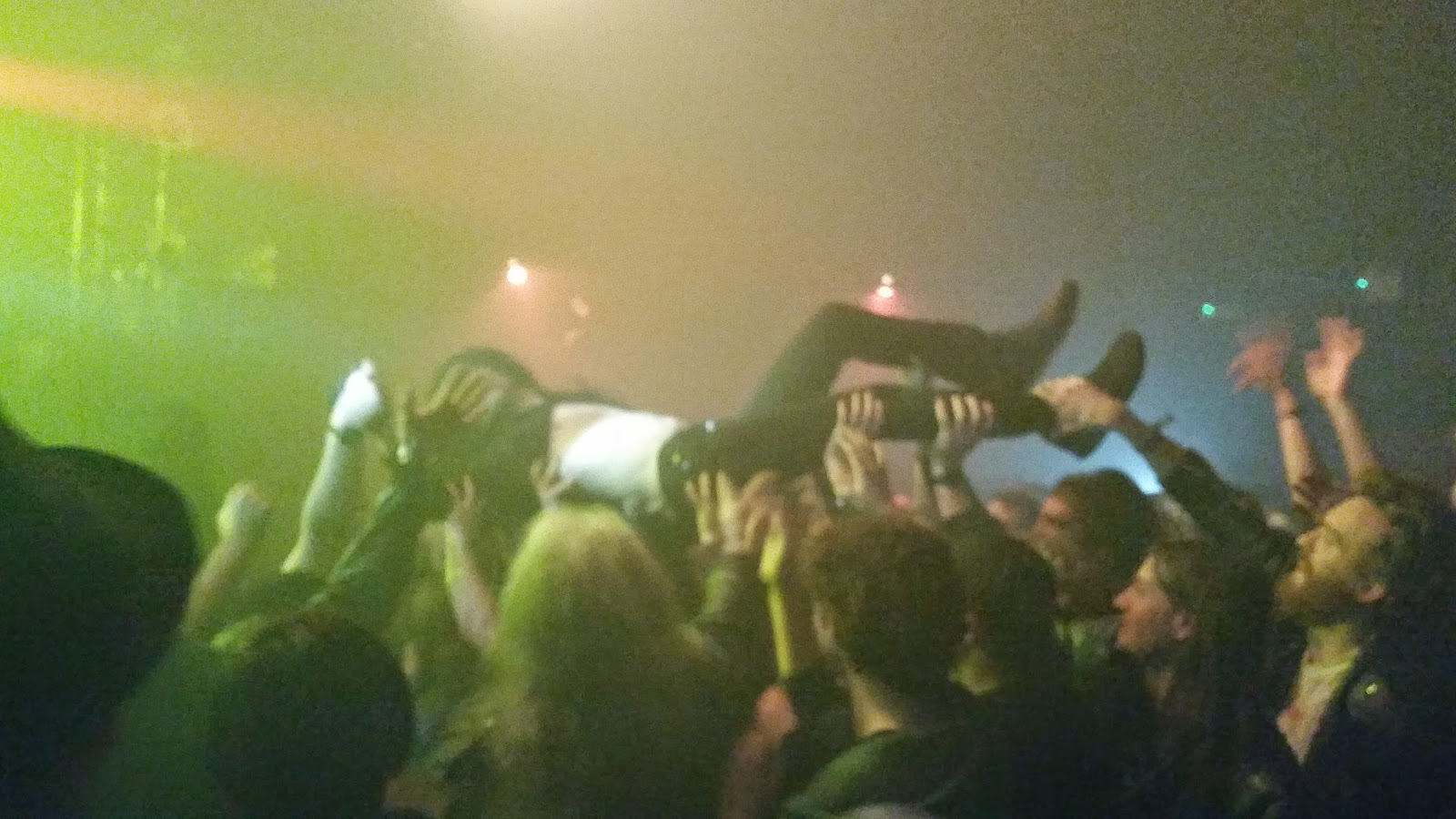 The last day. The pinnacle performance. The final curtain. Deserved Headliners Boris have been setting standards in creativity and abstract art in the alt scene for almost 20 years. Here was their chance to wow and they did not disappoint. A truly inspired performance, Boris' galvanized drollery included spaced out glitch guitars, peculiar resonance, mystical dry ice, crowd surfing drummer and a uniqueness that is rivaled by most and equaled by none...

Author and Photographer
Joe Head
Posted by Unknown at 13:44 No comments: